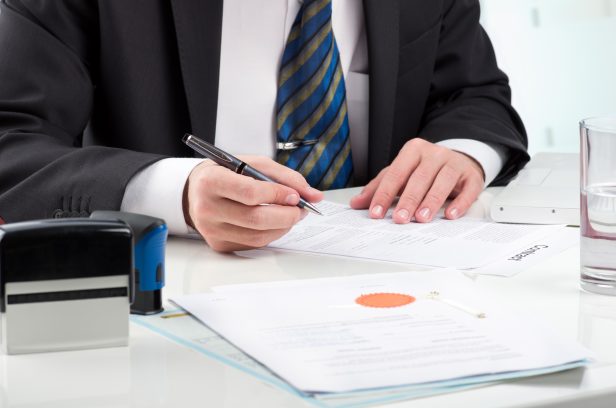 A notary public is a person who can serve as an official witness to the execution (signing) of contracts, agreements, and an almost limitless array of legal documents. Notaries may also certify documents to be true copies of the original. Notarization simply refers to an official act of a Notary. Notaries also have the authority to administer oaths, solemn affirmations, and declarations that are used for affidavits and statutory declarations. Please note that you must sign in the physical presence of Notaries for them to notarize your signature.

Having documents notarized provides assurance to others that that particular person signed the document. In the modern era, when contracts are routinely entered into between parties thousands of kilometers apart, notaries perform a useful function removing some of the risk associated with such remotely executed agreements. In essence, it makes it more difficult for a party to a contract to assert that she/he did not sign the document later.

In search of a place to have your documents notarized? Red Seal Notary has locations across Canada to make your search easy.

In some jurisdictions, a notary can also draft contracts, promissory notes, wills, mortgages and other legal documents. Almost always, the powers of a notary public in each province or territory are derived from provincial or territorial legislation. Generally speaking, however, in most Provinces the legislation is just a codification of the common law that preceded it.

For example, in Ontario, notaries derive their authority from the Notaries Act which states: “…a notary public has and may use and exercise the power of drawing, passing, keeping and issuing all deeds and contracts, charter-parties and other mercantile transactions in Ontario, and also of attesting all commercial instruments that may be brought before him or her for public protestation, and otherwise of acting as is usual in the office of notary public, and may demand, receive and have all the rights, profits and emoluments rightfully appertaining and belonging to the calling of notary public.”

In some jurisdictions such as a number of Canadian Provinces, the requirements for becoming a notary are such that effectively only lawyers are qualified to provide all notary public services. In Quebec, the requirements are similarly stringent, but different. In essence, the legal profession is split, so that you may need the services of a Notaire, or an Avocat, depending on the matter before you.

For a Notary Public to notarize your signature, you must sign it in the physical presence of the Notary. Generally speaking, it is best to wait until the Notary tells you that you can sign, as you may need to swear an oath first, for example. The most common mistake we see is customers coming in with documents already signed. Usually, this is easily rectified. You simply sign the document again in front of the Notary. However, it is, of course, a little messy. And it may not be accepted in your particular circumstances. If you want to be sure, contact your counsel, or the organization that you are sending the document to, and ask. If possible, bring a spare copy, just in case.

Many legal documents can be sworn, affirmed or declared before a Commissioner of Oaths, who need not be a Notary Public. If the document itself is going to be used outside the jurisdiction, especially internationally, you will likely need to swear or declare before a Notary. This is a practical result of the system used for confirming the execution of international documents. See our Authentication and Legalization page for details. If in doubt, it is normally best to use a Notary, as that covers you, either way. Fortunately, we have them. Just give us a call, send us an email, or click the Book Online tab.
Book Appointment